According to the American Cornhole Association (ACA), the following are the recommended rules of cornhole.

Each team is comprised of two people.

The approved method of scoring for the sport of cornhole is called "cancellation" scoring. In cancellation scoring, the points of one player cancel out the points of the opposing player. Using this method, only one player/team can score in each inning.

The game shall be played to the predetermined number of twenty-one points. The first player/team to reach (or exceed) that amount at the conclusion of an inning is the winner.

Below are the American Cornhole Association's standard rules, house rules may supersede these.

(a)Rules not found in a game's manual.

(c) House Rules apply for play with both Full and Travel Size Boards.

1. The following are rule violations that must be spotted and called by a player or assigned judge. The penalty is to declare the bag a foul bag, which requires the bags to be removed from the court prior to resuming play.

A foul bag is defined as:

(a)Any bag tossed when the player has (1) made contact with or crossed over the foul line, or (2) started or stepped completely outside the pitcher's box before the bag is released.

(b)Any bag not tossed within the 20-second time limit.

(c) A bag tossed from a different pitcher's box than the first bag.

(d) Any bag that contacted the court or the ground before coming to rest on the board.

(e) Any bag that struck a previously defined object such as a tree, limb, wire, indoor court ceiling, etc.

(f) Any bag removed from the board before scoring has been agreed upon for that bag.

(i)The offending team (who touches the bag) forfeits all remaining bags and tallies the score of just the bags thrown before the foul was reported.

(ii) The non-offending team tallies twelve (12) points as if they had thrown four Bag In-The-Holes (Cornholes) during the inning.

2. A bag that leaves a player's hand once the final forward swing of the delivery process has started shall count as a tossed bag.

3. A bag that is accidentally dropped by a player before the final forward swing has started shall not be considered foul and may be picked up and tossed.

4. Protests - If a player desires to make a protest, the protest shall be made to the judge or official at the time the problem occurs. The judge shall make the final ruling for all protests.

First, choose a player to create a tower with your 54 wooden Giant Mountain Blocks. Alternate between creating horizontal and vertical stories on your tower (three pieces placed side by side create one story). When construction is complete, your tower should be 18 stories tall.

Once the tower is created, players alternate removing a single block from the tower from anywhere below the highest complete story, and begin or add to a new story on top of the tower. Note, players must complete a story before expanding further.

1. Take the pieces out of the bag.

2. Race against the clock to put the blocks in order to build the puzzle.

3. Compete against your friends, the best time wins!

Of the 54 total puzzle pieces:

1. Compete against yourself or an opponent to see how many ringers you can score out of 10 tosses.

2. The person with the most ringers, wins.

1. Decide order of turns for all players playing.

2. The first player then makes any kind of shot at the ring.

3. If player 1 makes the shot, player 2 has to try to make the same shot from the same place and using the same style shot player 1 used.

4. If player 2 makes the shot then player 3 needs to attempt the shot, and continue this process until the shot rotation comes back to player 1.

5. If player 1 missed, then player 2 would become the leader.

6. Each time a player misses a shot that another player has made, another letter is added to their score beginning with h, then o, r, s, and e. When the player spells horse, he or she is out of the game.

7. The last person who did not receive all the letters is the winner. 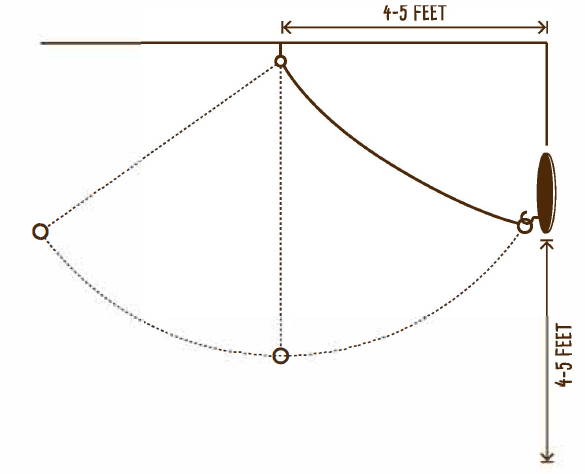 2. Mount the Target Board on wall, approximately 4 to 5 feet high using the adhesive tape and or screws enclosed.

3. Screw Eye Hook into ceiling in line with and approximately 4 to 5 feet away from the wall that the Target Board is attached to.

4. Tie string to the Ring and place Ring onto the Target Hook.

5. With help, hold the Ring in the horizontal position on the Target Hook and tie the open end of string onto the Eye Hook. Note, there must be a slight amount of slack in the string which will allow the Ring to hook onto the Target Hook when properly tossed. Adjust slack in string to achieve the optimum playabilty of the Hook and Ring game.

Note: This Hook and Ring Set can be attached and played on trees, decks etc., depending on the correct location of tree limbs and deck ceilings for installation of the Eye Hook. Simple fixtures can also be made from 2x4 lumber to accommodate both the Target Board and Eye Hook.

B. Tables assembled with only I leg, players sitting in chairs

C. Use the social pong targets on your desired playing surface (for example, on a dining table)

Note: You can place the top cover layer over the target to utilize your social pong game as a side table. Beautiful, practical and fun!

Get Ready, Get Set, Get Social, Pong

A popular way to start the game is to have two opposing players look each other in the eye and without looking away or looking at the cups, shoot at the cups. The first team that makes a cup goes first. Teammates alternate turns until someone makes it. If both teams make it, you keep shooting.

If a team hits the remaining cups during rebuttal, the game goes to overtime. Overtime consists of each team setting up 3 cups in a triangle format using water to fill them up. The team who hit the last cup prior to the rebuttal shoots first in overtime. Overtime is played like a normal game with the same rules applied.

If a player who does not have possession of the ball contacts the ball and as a result that ball enters one of his own cups, unintentionally acting as a backboard, that shot will be counted. 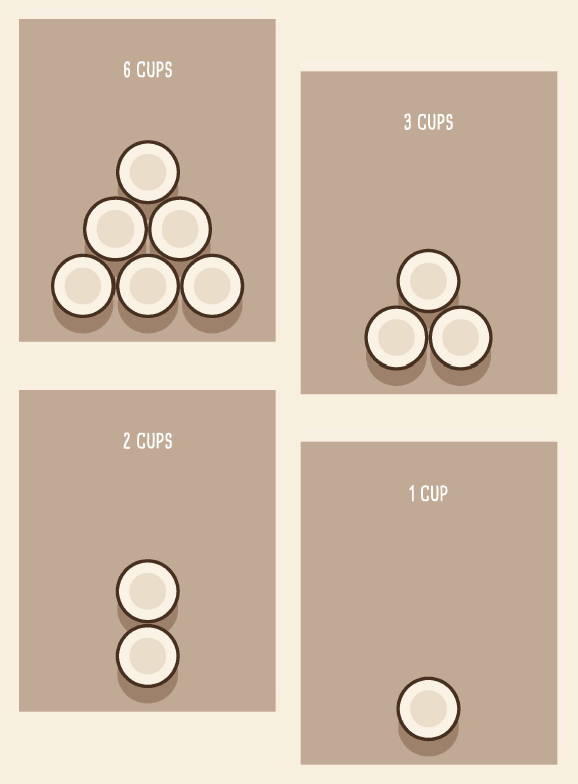 Although the cups begin in a pyramid, they don't necessarily stay that way. As there are more holes in the pyramid from removing cups, it gets more difficult to make shots. To account for this, a team must "re-rack" at certain numbers of remaining cups in order to keep a compact shape at which their opponents can shoot. Each team gets 2 re-racks per game at any time. The shooting team can choose how they want their cups arranged. A standard rule of thumb is to take one with 6 cups remaining, and with 2 or 3 cups remaining. Reformation is to take place as soon as applicable, even in the middle of a turn.

Bocce is played with eight large balls and one smaller target or object ball called a pallino. There are four balls per team and they are made of a different color or pattern to distinguish the balls of one team from those of the other team.

The player tossing the pallino must deliver the first ball. If the ball lands outside of the boundaries of the court, that team must roll again until the first ball is put into play. Otherwise, that player steps aside and the opposing team will then deliver their balls until one of its Bocce balls is closer to the pallino or has thrown all its balls. The "nearest ball" rule governs the sequence of thrown balls. The side whose ball is closest to the pallino is called the "in" ball and the opposing side the "out" ball. Whenever a team gets "in", it steps aside and allows the "out" team to deliver. The other team throws until it gets its ball closer (not ties) to the pallino. This continues until both teams have thrown all their Bocce balls. After both teams have exhausted all their balls, a frame is over and points are awarded. The game resumes by teams throwing from the opposite end of the court. The team that was awarded points in the previous frame begins the next frame by tossing the pallino into play.

All balls must be thrown underhanded. A team has the option of rolling, tossing, bouncing, etc. its ball down the court, provided it does not go outside the boundaries of the court or the player does not violate the foul line. The foul line is used to deliver all balls down the court with the intent of getting a ball closer to the pallino, knocking the opponent's ball away from the pallino, or hitting the pallino so that it ends up closer to your team's ball.

A player should not step on or over the foul line before releasing any ball. If a player steps over the foul line, the player will receive one warning. For a player that commits a second foul line infraction, the team fouled against will be awarded points as they were immediately proceeding the foul and the frame will end. The team committing the foul will be awarded no points for the frame, or the fouled against team may have the option of declining the penalty and completing the frame.

(Not included, but recommended for serious play)

New to the game of Washer Toss is the Game-Over Stake. At any point in the game, if a player rings their washer around the stake in the center of the target the game is over. No rebuttal or extra throws take place.

NOTE: The foul line is defined as stepping in front of the target next to your pitching box as shown in the diagram from “The Playfield”section.

At the end of each round, points will be determined using the cancellation scoring method. Each team adds their points and compares. The difference of the two is awarded to the higher scoring team for that round. The first team to score 21 points or ring the Game-Over Stake wins the game!

First 4 discs in a row wins.

Two players compete to see how many times they can get 4 in a row to win a game. Series can consist of 3, 5, or 7 games. The player that wins the most games out of the X game series is deemed the winner.